5 Films to Get you Stoked for Winter

The shoulder season can be long, but luckily, these films are dropping faster than the snow line. Don't miss these films featuring many talented local athletes, and some very familiar backdrops.

Izzy and Zoya Lynch were just regular kids growing up in the city, until their parents made one split-second decision that would completely change their lives. Kindred is the story about their family’s unlikely journey to becoming backcountry lodge owners and how it guided them both professionally and personally. Through archival photos and interviews from the Lynch family, combined with stunning imagery of Amiskwi Lodge in the Canadian Rockies, this film inspires viewers to consider their own leaps-of-faith and how they may have defined their lives. Don't miss the Into the Hills film tour featuring Kindred and Finding the Line on a tour through British Columbia and Alberta this Fall.
Kindred will play at the Into the Hills film tour at The Revelstoke Performing Arts Centre on November 9. 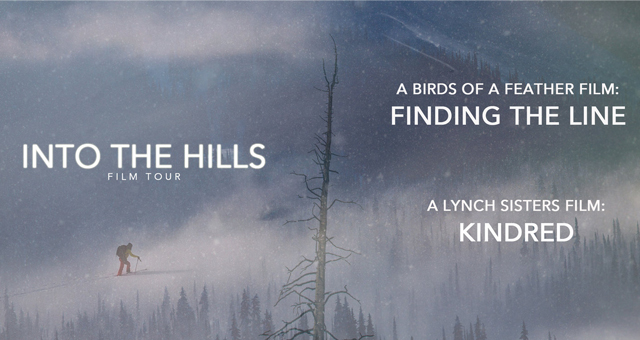 Finding the Line is a film about fear, it’s paralyzing grip on humans and how it affects our decision-making. Olympian and X Games Slopestyle champion Anna Segal and her Freeride World Tour, big mountain skiing sister, Nat Segal, use their skiing to understand fear and how it manifests in the two siblings’ lives.
Finding The Line will play at the Into the Hills film tour at The Revelstoke Performing Arts Centre on November 9.

Children of the Columbia: A Skier’s Odyssey

Follow two of the world’s best big mountain skiers, Christina Lustenberger and Dane Tudor as they travel the Columbia River from the Canadian border north to its source waters, moving through deep powder snows, legendary ranges, and a history that has tied its people to the land. Part ski adventure, part historical journey, part sensory feast, “Children of the Columbia: A Skier’s Odyssey,” is an artful, honest look at a region that has played a massive role in the Pacific Northwest as a whole, and the commercial backcountry ski industry worldwide.
Full feature drops November 6, 2018. Stay tuned to Sherpas Cinema channels.

Beyond the Powder Highway